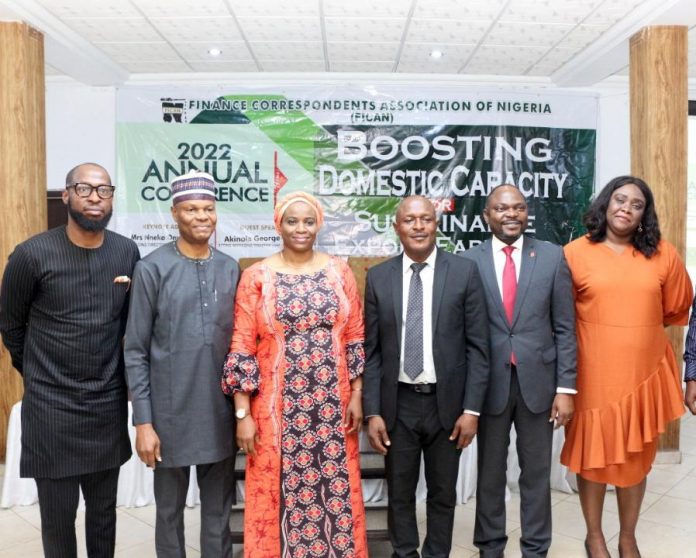 The Securities and Exchange Commission, SEC, has reiterated its commitment to developing the commodities ecosystem in Nigeria to boost its non-oil sector.

The Director-General of SEC, Lamido Yuguda, stated this at the 2022 annual conference of the Finance Correspondents Association of Nigeria, FICAN, held in Lagos over the weekend, with the theme ‘Boosting Domestic Capacity for Sustainable Export Earnings’.

Yuguda who was represented by the Director, Lagos Zonal Office of the Commission, Hafsat Rufia, noted that development of the commodities ecosystem would help the country achieve its quest for sustainable foreign exchange earnings and economic development.

The Commission’s boss said, “We believe that implementation of the roadmap for a vibrant commodity trading ecosystem in Nigeria by the Commission will support development of the agricultural sector and diversification of the Nigerian economy and, ultimately, advance the country towards attaining sustainable foreign exchange earnings.”

He added that it is imperative that the country focuses on all the sustainable foreign exchange earning avenues of the capital market for support over the medium to long term.

“We must, therefore, leverage on the capital market through the commodities ecosystem, the equity and bond markets to develop and exploit all the potential sources of forex.”

According to data from the National Bureau of Statistics, the total value of capital importation into Nigeria in the second quarter of 2022 stood at $1.535 billion. The largest amount of capital importation was received through portfolio investments, which accounted for 49.33 per cent ($757.32 million). Foreign Direct Investments, FDI, accounted for 9.58 per cent ($147.16 million) while Other Investments stood at 41.09 per cent ($630.87 million).

The SEC DG stated that the Securities and Exchange Commission continues to advocate for a unified foreign exchange rate in order to attract more foreign portfolio investments into the country, adding “We appreciate the efforts of the Central Bank of Nigeria in exchange rate management and will support in whatever way we can to enable achievement of the objective of exchange rate stability.”

Representing the Managing Director and Chief Executive Officer of Bank of Industry, BoI, Olukayode Pitan, the Project Officer, Ominiaboh Uyoyou Jermila, said the national budget is heavily reliant on the revenue generated from the oil sector, lamenting that since the 70s, the focus on oil as a major source of foreign exchange has negatively impacted growth in the non-oil sector and has led to decline in its contribution to foreign exchange earnings.

He noted that, nonetheless, the non-oil sector contribution to GDP has been significant, pointing out that during the 2008 global financial crisis the non-oil sector helped to absorb extra natural shocks caused by the declining oil revenue.

He explained that sectors such as telecommunications, ICT, trade, industry and agriculture were critical to the economic recovery from the 2008 financial crisis and have remained so following the twin economic recession in 2016 and 2020.

Pitan said this has highlighted the need for economic diversification, which has become a significant point in national and policy-making imperatives, though with varying degrees of success.

He added that boosting exports earnings has become more important given the naira devaluation and shrinking foreign exchange reserves.

As a result of this, he said, the government has made more concerted efforts to focus on the non-oil sector for the increase and efficient collection of customs duties and other taxes.

Pitan noted that while there have been a lot of government policies and initiatives to encourage non-oil exports, especially among small and medium scale industries, the performance of the sector is still likely to be below par due.

He attributed this to the challenges of low inputs, dependencies on primary inputs and entrepreneurial nature of basic industry, policy inconsistencies, insufficient skilled manpower, high lending rates, among others.

He added that BoI has provided financial assistance for the establishment of large, medium and small projects, as well as expansion, diversification and modernisation of existing enterprises.

The Deputy Managing Director, United Bank for Africa, Muyiwa Akinyemi, in the same vein, noted that the discovery of crude oil brought a shift that has made the country to majorly depend on the oil sector to the neglect of other sectors.

According to him, this made the economy susceptible to fluctuations in revenue, occasioned by the usual instability associated with the prices of crude oil in the international market.

“Successive governments have made differing efforts at diversifying the revenue sources of the economy by promoting non-oil export trade which cumulatively impacts on overall economic growth”, Akinyemi said.

On some of UBA’s key interventions to facilitate export, he mentioned that the bank had developed a $200 million non-oil export trade financing programme to bridge working capital requirements of SMEs/commercial exporters at concessionary interest rate and favourable collateral structure and provided project and structured trade financing to enhancing export capacities of manufacturing.

Danbatta, Oseni to Brainstorm on Fintech as FiBOP Holds Maiden Conference in Lagos