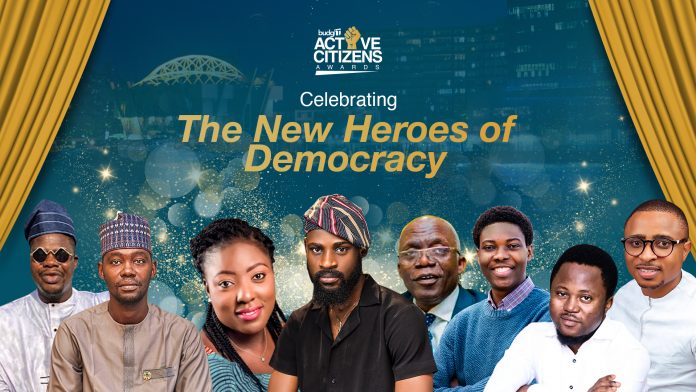 … Debt Management Office, Macaroni and others win other categories

BudgIT, a civic-tech organisation leading the advocacy for accountability, transparency and effective service delivery in Nigeria and four other African countries, officially announced and celebrated the winners of the maiden edition of the Active Citizens’ Award.

The award celebrated phenomenal individuals and organisations that are creating sustainable impacts that have benefited citizens and instituted civic and social change to improve the nation’s democratic development. It was a pleasure to host dignitaries celebrating the new heroes of Nigeria’s democracy. The award had in attendance Adenike Adeyemi, Executive Director, Fate Foundation; Oreoluwa Somolu Lesi, Executive Director, Women’s Technology Empowerment Centre, Hamzat Lawal, Executive Director, Connected Development, among others.

Announcing the winners, Tunde Onakoya, founder of Chess in Slums, emerged winner of the star award, which was the Active Citizens Award, for his tremendous contribution to empowering Nigerian children in impoverished communities.

In the same vein, the Debt Management Office and Debo Macaroni emerged as winners of the Awards for Institutional Transparency (Government Agencies), which recognise a government agency that provides quality service delivery that contributes significantly to the development of the Nigerian populace, and the Art for Activism Award, which celebrates a work of art that has pushed for political consciousness, reform, and national change, respectively.

Recipients for other non-nomination categories include TIERS Nigeria, which won the Award for Inclusion and Diversity for promoting equality through inclusion and diversity among marginalised groups; Femi Falana, SAN, who won the Hall of Fame Award for Civic Activism for his contribution to national development via civic activism; and Union Bank of Nigeria, which won the Corporate Award for Civic Investments for positively impacting society through its support or engagement in civic activism.

For the nomination category, the recipients are Solomon O. Ayodele, Founder, Boys Quarters Africa, who won the Award for Community Service; Taiwo Adebulu, The Cable, who won the Solutions Journalism Award; Adepeju Jaiyeoba, BrownButton Foundation, who won the Oby Ezekwesili Award for Women Advocacy; Muazu Alhaji Modu, Spotlight for Transparency and Accountability, who won the Civic Activism Award, and Sola Owoniko, Project Enable, who bagged the award for Disability Empowerment.

Commenting, BudgIT’s Global Director, Oluseun Onigbinde, noted that the Active Citizens Awards will be an annual signature event to foster dialogue and value the contributions of development leaders to good governance and effective service delivery in Nigeria, adding that BudgIT is open to leveraging public-private partnerships for future editions in order to expand the scope of the awards beyond its immediate threshold’.

‘The Active Citizen’s Award will be a yearly event to commemorate BudgIT’s anniversary. While we promote personalities who are doing incredible work in Nigeria’s democracy and across different spectrums, we would also measure our impact within Nigeria’s civic ecosystem. Congratulations to all the nominees and winners.’ Oluseun added.

The CBN, MPC raising interest rates is unidirectional and would affect both businesses and individuals-NACCIMA