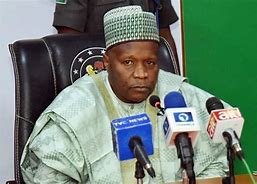 “Before the assumption of office by Governor Muhammadu Inuwa Yahaya in 2019, Gombe metropolis and its environs were without potable water supply.”

It has become necessary for the Gombe State Government to, at this time, put the records straight and present the facts to the people of the state and other Nigerians on the state of its finances in view of the recent proxy attacks on the current administration, one whose achievements in just a little over two years of its existence, have been giving some unpatriotic elements in the state and beyond sleepless nights.

The stock in trade of this crop of people, hiding under the guise of media and parading themselves as champions of the people in a rather mischievous and clueless manner, using every means available to blackmail the Gombe State Government, particularly Governor Muhammadu Inuwa Yahaya whose superlative performance goes beyond their imagination.

This could only be the handiwork of those who have lost relevance in the politics and scheme of things in Gombe State and have therefore chosen to take the path of perdition. However their days of mischief are numbered, and the good people of Gombe State know who they are. Any attempt to hide under any guise will not work as their identities are well known. It is rather a pity that some faceless groups suddenly sprang up all in the name of attacking the Gombe State Government. Soon, we shall unmask the sponsors and shame them in the public.

To set the records straight, the current administration under the leadership of Governor Muhammadu Inuwa Yahaya came into being on May 29, 2019, having won the elections with an unprecedented number of votes, the highest by any elected governor in the history of the state. Upon assumption of office, the administration was confronted with an empty treasury and a burden of over N124 billion in Loans/Bonds, Pension/Gratuity arrears and contractors’ liabilities.

One aspect of the financial burden inherited by the Muhammadu Inuwa Yahaya administration include in part the following facilities listed below: Cumulatively, the Muhammadu Inuwa Yahaya administration pays N900.4 million monthly to service the aforementioned inherited facilities! More worrisome is the fact that these loans were not utilised by the previous administration for the purposes they were obtained. Due to its determination and the desire to uplift the living conditions of our senior citizens, the current administration has cleared over N2.4 billion gratuity arrears and is still poised to pay another tranche by December 2021.

The inherited bonds raised by the past administration cumulatively in the sum of N25 billion as earlier mentioned for infrastructure were spent without completing most of the projects. This can be seen from the table below: From the above, it is clear that all the projects initiated by the past administration between 2012 and 2013 were not completed at the time the administration handed over in 2019, giving credence to the fact most of the funds were either misappropriated or misapplied. This goes to show the recklessness and cluelessness of the past administration. These projects need to be completed otherwise they will be left to rot away thereby losing all the funds while the present administration contends with paying the bond holders. Already, the Mega Motor Park is costing the state about N3bn to complete. The nagging question for all to answer, therefore, is how do we complete these projects and save the state from colossal loss especially with economic downturn occasioned by the Covid-19 pandemic and its debilitating effects. A well thought out robust financial plan becomes inevitable!

Despite the economic depression that has led to the devaluation of the naira and heightened inflation, the Muhammadu Inuwa Yahaya government has been able to meet its obligations and is executing meaningful projects that are impacting positively on the lives of the citizenry. Prior to the MIY administration, between 2016 and 2019, the 11 LGA’s had to borrow N1.3 billion monthly to pay salaries. This administration had within the first three months of its coming stabilized the LGAs financially and are now able to pay their salaries and pensions as at when due on their own. The state government has also been consistent in the monthly payment of the new minimum wage salary even as this has increased the state’s wage bill by over N2.85 billion annually.

Before the assumption of office by Governor Muhammadu Inuwa Yahaya in 2019, Gombe metropolis and its environs were without potable water supply mainly due to the neglect of the water works and unpaid liabilities of over N5 billion. The MIY administration swiftly responded by settling the outstanding liabilities. This has guaranteed the restoration of adequate supply of water to Gombe metropolis and its environs with the pumping of about 50m litres of water daily.

The writer cited a N12 billion facility obtained by this administration but blatantly refused to acknowledge the present government’s giant stride in the provision of critical infrastructure especially the completion of the abandoned regional and township roads, due to lack of funding  by the last administration, such as  the 25km Billiri- Gujba road, the 15km Sabon layi-Ayaba road, the 15km Ladongar – Fubawure road, the 17km Kumo – Kalshingi   road, the 10km Kutare – Mona road, the 10km Kundulum – mallam inna – Kurba road and the 16km Marraraban Jarkwami – Daniya roads as well as the Industrial Cluster road networks.  These projects have since been completed and are being enjoyed by the people. Other road projects being completed by the present administration under the same funding arrangement include Dukku – Kalam – Dokoro, Dukku – Jamari, Bambam – Tula – Yiri,  Kwanar Rugaji – Kuka Bakwai – Galgaldu and Bajoga township roads among others. The MIY administration also initiated and completed the 15.2km Jabba – Garin Wada, the 21km Degri – Talasse and 16km Malala – Dukkuyel regional roads with the same funding. These are aside the township road projects in Gombe metropolis.

As it is a standard practice, funding of counterpart projects are done through bank facilities. The state has been transparently executing such projects for the benefit of the people. Over 340 classroom blocks have either been constructed or renovated and equipped with modern teaching and learning materials. The $2m NSHIP counterpart payment that facilitated the total overhaul of our 114 Primary Healthcare Centres (PHCs) across 114 wards in the state was also part of this facility. So also the NEWMAP/WB erosion control project for N2.9 billion which is completed and has greatly assisted in reducing the menace of erosion and flooding in the state capital especially in the Gombe State University to Mallam Inna area.

The Contractor Finance Facility (CFF), even though not a direct loan but a guarantee to the contractors was secured to ensure the provision of ultra-modern solar powered street lights on all our roads – both double and single lanes – totaling over 114km of roads, fund the biometric and attendance equipment contract for which hundreds of millions of naira has already been saved and the guaranteed balance will be assessed by competent contractors to complement the N2 billion FGN health facility designed to help states upgrade their health facilities due to the Covid 19 pandemic. At present, a new N1.8 billion general hospital is under construction in Kumo, while three other hospitals are being renovated and upgraded. These include Bajoga hospital (N650 million), Kaltungo (N1.2 billion) and Kuri (N118 million).

The desire of the Muhammadu Inuwa Yahaya administration to bequeath a better and more economically viable State brought about the idea to raise the N35 billion Sukuk bond. A painstaking review and evaluation of our state of finances was undertaken. This revealed a funding gap that needed to be hedged in order to enable government deliver on its mandate. Again, the time value of money and low rates of interest played major roles in taking the decision. This is aside the need to ensure the completion of abandoned projects of the past administration. At present the debt-to-revenue ratio of the state is one of the lowest in the country at about 22 per cent; far less than the 73 per cent of the federal Government. Recall that this ratio, due to the reckless misapplication of facilities by the last administration had overshot the 20 per cent maximum limit and made it impossible for the present administration to adequately finance its projects. The review of the ratio to 40 per cent now provided the window for the state to access funding. The proposed bond proceeds will be utilized to fund Phase 1 of the Muhammadu Buhari Industrial Park, the Gombe Capital Special Development Zone, which will include a new state secretariat complex, a new state assembly complex and a new judiciary complex – a replica of the 3 arms zone in Abuja. Part of the proceeds will also be used for the expansion of the Gombe Regional Water Project for which the FGN is also making a 30 per cent contribution in the over N7 billion project. The bond is designed in a way that it will not to have any negative effect on the state throughout its term.

The desire of the present administration to provide social and affordable housing for the states’ civil servants especially the low income earners as well as staff quarters in all health and educational institutions informed the need to key into the Federal Governments’ Family homes fund initiative. This seeks to bridge the housing deficit in the country. Gombe like all other states of the federation seeks to access N5bn at very low concessional terms.

Incidentally, the Federal Government in its bid to assist the sub-nationals contend with the effect of repayments of the existing FGN facilities has extended a N18.7 billion FGN intervention facility with a 30-year tenure and a 2-year moratorium.  Recall that such interventions were earlier enjoyed by the past administration but were misappropriated as there is nothing to show for the huge sum of moneys they got including the huge Paris club refunds of about N24 billion! The FGN’s window of opportunity for a transparent and accountable government such as that of Governor Muhammadu Inuwa Yahaya will greatly assist Gombe State to invest in more critical infrastructure that will stimulate growth and bring about economic prosperity.

Borrowing is generally an accepted norm the world over in order to fund deficits, provide critical infrastructure and hedge against depreciation. The only downside is when it is misapplied or diverted from the original intent.  That therefore should be the worry and concern of every indigene of Gombe. All facilities obtained must be tied to projects, budgeted for and utilized for the purpose they are meant for. Till date, no recurrent borrowings have been made by the present administration. Furthermore, the MIY administration has always followed due process and met all regulatory requirements in all its dealings with financial institution and will continue to do so.

With the strides achieved by the current administration, the state has attained national recognition from different credible rating agencies. These include; the best state in the Ease of Doing Business in Nigeria; the Number 10 on the Transparency and Accountability index and Number 7 on Fiscal Responsibility index among others. The present administration has also succeeded in creating a clear roadmap and has placed Gombe State on the trajectory of sustainable development through the 10-year plan (DEVAGOM).

The MIY administration takes seriously its covenant with the good people of Gombe and will not in any way betray the trust bestowed in it by the people but will only strive to exceed their expectations.

Commissioner for Information and Culture.