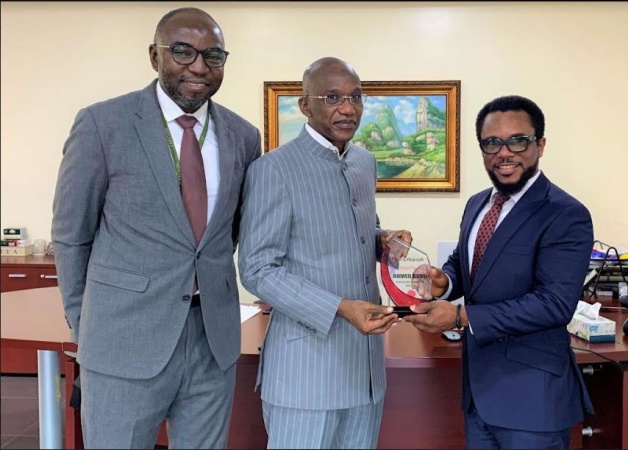 The Managing Director/CEO of Asset Management Corporation of Nigeria, AMCON, Ahmed Kuru, who recently won the “Public Integrity Award 2021,” at the maiden edition of the New Telegraph Newspaper Awards 2021 in Lagos has been presented with the crystal award plaque.

Head, Corporate Communications at AMCON Jude Nwauzor, it was gathered made the presentation to his Boss at the Head Office of the government agency located in Maitama area of the Federal Capital Territory, FCT, Abuja.

Recall that the AMCON boss was not on hand to receive the award from the organizers at the event, which was recently held at the Federal Palace Hotel in Victoria Island, Lagos but detailed Nwauzor, the agency’s spokesperson to represent him. Kuru we learnt had another national assignment that clashed with the day of the ceremony, which made it impossible for his attendance.

How To Access First Bank N1 million loan facilities through its 86,300 Firstmonie agents

Standard Chartered to Shutdown 50% of its Nigerian Branches