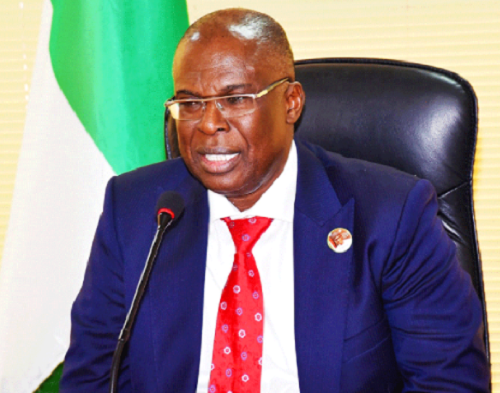 The Federal Government of Nigeria has said that it will continue to work with stakeholders for the improvement of the West African Gas Pipeline Project, WAGP, performance.

The Minister of State for Petroleum Resources, Timipre Sylva, said this on Tuesday in Abuja at the opening of the meeting of the Committee of Ministers of the West African Gas Pipeline Authority, WAGPA, project.

The WAGP project, is a visionary project originated from the ECOWAS Energy Policy and aimed at fostering economic development and integration among ECOWAS States through cross border natural gas transportation.

Sylva said over the years, the Nigerian government had shown leadership in ensuring that WAGPA was properly positioned to ensure that the objectives for which the organisation was set up were achieved.

The minister described the meeting as a commitment and dedication to the success of the project which was a true proof of economic integration and cooperation in the sub-region.

He said the meeting came at a very critical time, especially the changing socio-political landscape occasioned by the Russian-Ukrainian war that had put pressure on global gas demands across Europe.

Noting that since inception, the committee had worked collectively to achieve some successes and projects through cooperative efforts of member countries in spite of the challenges in the sector.

He noted others as Lifting of Force Majeure that was in place by Nigeria Gas Company,  NGC,  between June 2013 and October 2020; and the reforms of the Access Code to the WAGP Network Code.

Another project, according to the him is the ongoing amendment to the WAGP Act and the WAGP Regulations.

This, he said, would ultimately among other things give a licencing power to WAGP authority to oversee the activities of the Shippers as it related to the WAGP, for free and fair business environment.

“However, there are more to achieve and we are determined to get to the zenith of our targets, which are to deepen gas supplies and utilisation within the ECOWAS sub-region.

The global community has classified gas as part of renewable energy.

“Since we cannot but join the global energy transition train we must hurry to exploit the abundant natural gas deposits within the borders of our respective countries,” he said.

On the institutional level, he said the meeting was a follow-up on the extraordinary meeting of the committee held in Accra, Ghana on Nov. 16, 2021 to consider issues related to the appointment of the Director-General of WAGPA.

He said the solution that emerged from its discussions in Accra, in November 2021 to move ahead with the appointment of a Nigerian as a Director-General for WAGPA was very critical.

“In the circumstances therefore, I will seek the understanding and cooperation of all to be guided by the provisions of WAGPA Treaty in reaching a sustainable, profitable and fair decision on this matter,” he said.

He then appreciated the effort of its partner, the West African Gas Company Ltd., WAPCo, as Operator of the pipeline to implement the International Project Agreement and assure transportation of natural gas from entry points to customers in the State Parties.

He said the ECOWAS Commission had initiated the West African Gas Pipeline Expansion Project (WAGPEP) and was currently working with the Nigeria-Morocco Gas Pipeline (NMGP) Project for possible synergy between the two projects.

“I also know that WAPCo and WAGPA are working closely with the entities to provide technical assistance and experience to achieve the synergy to increase the potential to deliver natural gas for more countries in the ECOWAS sub region and beyond,” he said.

In a remark, the Director-General, CoM, WAPGA, Chafari Hanawa,  said it would accelerate growth within WAGPA’s mandate under the WAGP Treaty, International Project Agreement, IPA, the Enabling Legislation, the WAGPA Regulations and other applicable instruments.

She said it would collaborate with WAPCO and other stakeholders in the WAGP project to identify area of gap in the delivery of better services by WAGPA and abridge such gap to ensure increased and sustainable flow of gas.

“This is important because adequate flow of gas to end users through the WAGP will fast track positive growth of the power sector of the countries, accelerate industrialisation, generate employment, increase revenue for the State Parties and increase infrastructural developments for our people.”

The Ghana’s Minister of Energy and Chairman of the Committee, Matthew Prempeh while declaring the meeting open called for plans to extend pipelines further along west African Coast up to Morocco to supply natural gas countries along the pipeline route and in-land.

“It is for this reason that effort must be made to enhance operational efficiency of pipeline and strengthen the regulatory authority to perform its role,” he said.