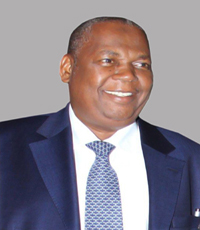 The Nigeria Deposit Insurance Corporation, NDIC, has taken the lead in capacity building with regards to empowering Finance Correspondents.

The regulatory authority in its wisdom approved capacity building for Finance Journalists every year so as to be grounded in Financial Reporting. So everybody is carried along.  But other see it as a privilege which goes to the selected few. Whereas all the regulatory authorities have a policy of empowering all the finance correspondents so that they will be abreast with happenings in the Financial Sector. One of the Facilitators from a regulatory authority name withheld testified last year that he could see many faces at the NDIC Workshop unlike his own institution’s workshop held earlier for FICAN. Even though one of the stories from the workshop threw him off balance.

The Chief Executive and Managing Director, NDIC, Umaru Ibrahim does not hide his love for Finance Correspondents. He has called for partnership with other regulatory authorities like the Central Bank of Nigeria, CBN, National Pension Commission, PENCOM, National Insurance Commission, NAICOM, to establish a programme for Journalists in Financial Reporting. The NDIC boss has continuously reiterated the corporation’s commitment to collaborating with Finance Correspondents with regards to accurate reportage of the Financial Sector of the economy.

The 2019 NDIC workshop for Business Editors and Finance Correspondents Association of Nigeria, FICAN, with the theme: Nigerian Banking System Stability: Tackling Emerging Issues held Adamawa State would not be forgotten in a hurry as the corporation ensured a very good outing as it has been its practice.

If you are attending NDIC workshop, all you need to do is to get to the Airport in the State where the workshop is holding. The Corporation will take you from the Airport to your hotel room, from there to the venue and back to your hotel.

At the end of the workshop, they will take you to the Airport. It is their priority to make you happy during the workshop.  The team ensures that you get travel allowance worthy of the trip unlike others who will give you errand boy allowance as if journalists are not fathers and mothers with issues to take care of.

Journalists with their families were happy during last Christmas because they were buoyant during the festivity.

During the workshop, the Corporation assembled array of professionals who did justice to the topic.

Speaking on Consumer Protection in the Financial System:  the role of the Central Bank of Nigeria CBN, and other regulatory agencies Kofo AbdulSalam-Alada, Director, Consumer Protection Department, Central Bank of Nigeria, CBN, said  In 2008/2009, Nigeria suffered a financial crisis that had been triggered by the 2007 Global Financial Crisis which threatened the stability of the financial system; a diagnosis revealed that lack of Consumer Sophistication, amongst others, was a major responsible factor for the crisis.

He pointed out that in response, the Central Bank of Nigeria (CBN) in furtherance of its mandate to “promote a sound financial system in Nigeria” commenced a banking reform placing high priority on restoring consumer confidence.

“It culminated in the creation of the Consumer Protection Department in 2012; In 2011, Financial Regulators from 20 developing countries committed to improving financial inclusion (MAYA DECLARATION); Nigeria made a commitment to reduce the number of eligible adult Nigerians that were financially excluded from 46.3% in 2010 to 20% by the year 2020; A National Financial Inclusion Strategy (NFIS) was launched by the President on 23rd October, 2012 and placed high priority on Financial Literacy and Consumer Protection:, he said.

Consumer Protection according to him is the whole range of laws, policies, structures, actions and behaviours designed to protect consumers in the market place.

“Whilst the social importance of financial services has not diminished, the character of providers has changed from state owned to private entities formed for profit-making and responsible only to their shareholders whose primary interest is profit maximisation. The pursuit of this pecuniary objective exposes consumers to exploitation hence the need for governments to establish consumer protection measures to ensure financial services meet basic expectations and quality standards”, he added.

The Director stated that there is an extraordinary imbalance of power between financial services providers and consumers.

He listed the goal of consumer protection to include, to mitigate this power imbalance, low financial literacy/awareness; information asymmetry; increasing complexity of financial products and services; enlarged risk appetite of financial service providers as a result of competition; Inequality of bargaining power and the need for an efficient redress mechanisms.

Another high profile professional, Sunday Oluyemi, Director,  Communication & Public Affairs Department, NDIC, who spoke on the Role of Banks in Financial Literacy & Financial  Inclusion, pointed out that Financial Inclusion has many benefits to the Nigerian economy, which he listed to include reducing poverty, income and social inequality, broadening wealth creation and distribution, achieving the targeted level of financial inclusion requires concerted efforts by all stakeholders, especially banks and to tackle the challenge of financial inclusion as we navigate our way towards the ideals of Vision 2020.

“The NFIS is essential to increase financial inclusion and consumers have to gain the knowledge, skills and confidence they need to make good financial decisions and the banking industry is necessary and supportive of the strategy’s goals”, he said.

On the role of banks, he said the 2020 target for Agents was 62 per 100,000 adults in the 2012 Strategy document. However, considering the shift from physical bank branches to branchless banking globally, this revised Strategy considers increasing the Agent target from 62 to 476 Agents per 100,000 adults by 2020.

The justification for this new figure according to him is based on recent developments in the financial sector aimed at taking financial services to the unserved and under-served using branchless platforms such as Agent banking and digital platforms.

Also speaking on Issues in Banking Regulation and supervision, Hassan Mamud,  Deputy Director, Financial Policy and Regulation Department, CBN, said banks exist primarily to play the role of financial intermediation with the aim of ensuring efficient allocation of funds in the economy.

Financial intermediation according to him is a productive activity in which an institutional unit incurs liabilities on its own account for the purpose of acquiring financial assets by engaging in financial transactions in the market.

He pointed out that the role of financial intermediaries is to channel funds from areas of surplus (lenders) to areas of deficit (borrowers). Thus, the key players apart from the banks in the financial intermediation process are the borrowers, also known as spenders and savers, also called lenders.

Speaking further, he said, Financial intermediation helps to keep the wheel of economic growth rolling. Problems arise in any market economy when banks are unable to carry out this function as the economy begins to experience a decline in economic growth and development.

“Prior to the global financial crisis of 2007 – 2009, supervision was carried out on a micro-level, which focused attention on the health of individual banks in the system. The financial crisis exposed the weaknesses of this mechanism, some of which include: The focus on the health of individual banks causes supervisors to ignore the safety and soundness of the financial system as a whole, as they did not take account of systemic risk arising from the linkages between financial institutions”, he stressed.

“It did not consider the interconnectedness of the banking system and the interaction between the sector and other macroeconomic variables. These lead to contagion risk and heighten financial system stability. Hence, the introduction of macro-prudential regulation. Focuses on managing risks across the financial system spectrum and the economy. Its major goal is to reduce the risk and the macroeconomic costs of financial instability”, he stressed further.

“Unlike micro-prudential regulation which sees risk as an exogenous factor, it recognizes risk as an endogenous factor that is dependent on collective behaviour. Thus, it addresses the interconnectedness of individual financial institutions and market, as well as their common exposure to economic risk factors”, stated the deputy director.

Another facilitator, Kabir Katata, Deputy Director, Research Department, NDIC, who spoke on the theme: Fintech & the Future of Banking said FinTech…Technologically enabled innovation in financial services that could result in new business models, applications, processes or products with an associated material effect on the provision of financial services.

He listed examples of FinTech banking services to include chip-based debit/credit cards, mobile and web-based payments, cloud computing in financial services and Blockchain/DLT.

On Some Benefits of FinTech/Digital finance, he said, depositors/customers have access to financial services easier, faster and cheaper, SMEs will get access to new credit and can lead to greater financial inclusion.

Others are enhance competition and resilience of the financial system, banks will become more productive, with lower transaction costs, greater capital efficiency and stronger operational resilience.

He pointed out that Fintech firms and bigtech organizations are capturing more and more of the banking value chain, providing services such as payments, checking and even savings accounts that could erode much of the traditional bank revenues in the foreseeable future.

These new entrants according to him pose a threat to banks by raising service expectations and coming between banks and their customers.

“The response goes far beyond closing branches, improving online and mobile banking offerings or making current products and services “more digital.” Instead, banks need to move further into the daily lives of customers, providing assistance before, during and after the financial transaction.

To be successful as a Bank in 2030 (PwC), the bank of the future will need to embrace emerging technology, remain flexible to adopt evolving business models, and put customers at the center of every strategy”, he added.

“It is clear that Nigeria has a rich experience in bank failure resolution as it has adopted various resolution measures including open bank assistance, deposit payout & liquidation, P&A, bridge-bank as well as assisted mergers & acquisition. There is potential impact of a bank’s failure on confidence in the Nigerian financial sector, financial inclusion and socioeconomic consequences. Should a bank fail and its customers suffer hardship in the process, it is likely to harm their confidence in the formal banking system and to have broader social consequences, especially if there are spillover effects to other banks in the sector”, he said.

But he listed the challenges to include Cumbersome judicial process resulting in long- drawn out litigation on winding-up actions and debt recovery matters, Poor public awareness. Poor record keeping (financials, mandate records and broken down system.

Others are problems of Asset realisation (loans and physical assets) due to large size of insider loans, poor loan documentation, poor quality, lack of secondary market for risk assets and court action by erstwhile shareholders.

Danbatta, Oseni to Brainstorm on Fintech as FiBOP Holds Maiden Conference in Lagos