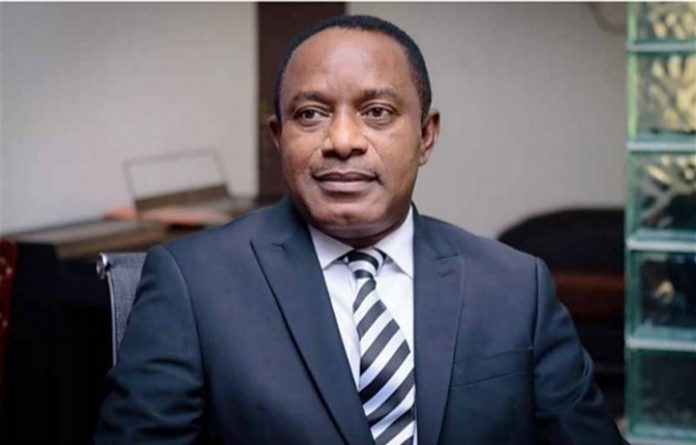 The Business mogul and the Managing Director of Mallison and Partners, Ukatu Afamefuna Mallison who regained freedom on October 12, 2022 after perfecting bail conditions issued by the Federal High Court Ikoyi, Lagos was however, re-arrested by men of the National Drug Law Enforcement Agency, NDLEA,  at the premises of the court same day.

NDLEA official who came to the court premises on mufti manhandled and bundled Mallison into their waiting vehicle and clamped him into their detention camp at NAHCO situated at the International Airport, Ikeja, Lagos.

Aggrieved by this inhuman treatment, Mallison has filed a suit against NDLEA at the Federal High Court in Lagos over the seeming infringement of his fundamental human right as guaranteed by the constitution of the Federal Republic of Nigeria.

This includes the court’s order directing NDLEA to tender a public apology to him for this unlawful arrest and detention and publishing same in three national dailies, preferably, The Punch, The Nation and Vanguard, or any other national tabloid the honorable court may prescribe as a medium for such publication in line with the provisions of Section 35 (6) of the constitution of the Federal Republic of Nigeria 1999 (as amended).

Other reliefs sought by the applicant include a declaration by the court that his arrest within the  precincts of the court and detention on October 12, 2022 by NDLEA after being admitted to bail by Justice  Lifu sitting at the Lagos Judicial Division of the Federal High Court of Nigeria in charge No:FHC/L/159C/2021 and after perfecting the bail condition,  on the basis of “Orders from above” is a truculent violation of his fundamental human rights and a declaration that the statement “orders from above’ made by NDLEA officers to the applicant as reason for the arrest, detention and continued detention since October 12, 2022 till date at NDLEA cell at NAHCO compound, International Airport Road, Ikeja Lagos is not a justifiable reason neither does same constitute facts and grounds for arrest and detention.

Furthermore, Mallisson is seeking a declaration of the court that “Order from above” is not being a justifiable ground for his arrest, detention and continued detention since October 12 and therefore constitutes a flagrant violation of his human right to liberty as guaranteed by Section35 of 1999 Constitution (as amended); a declaration that his arrest within the precincts of the Federal High Court, Lagos and subsequent detention by NDLEA without informing him in writing and in a language he understands, the facts and grounds of his arrest and detention is a violation constitutional right.

He also seeks the courts declaration that the inhuman and unprofessional mode of his arrest on the 12th of October, 2022 and the torture and degrading treatment he was subjected to by NDLEA officials during his arrest and whilst in custody of NDLEA constitutes a truculent violation of his fundamental human right to dignity of human persons as enshrined and prote3cted by the 1999 Nigerian constitution as amended (section 34 thereof) and Article 5 of the African Charter on  Human and Peoples rights (ratification and enforcement) Act, Cap A9, updated laws of the Federation of Nigeria 2010.  He prays that the court to release and or direct NDLEA, its servants, agents, privies, employees and representatives to immediately and unconditionally release him from tits custody.

In the suit document sighted by our correspondent, solicitors to Mallison, Victor Opara’s Chambers expressed their grief by the unwholesome infringement of their client’s fundamental right as constitutionally guaranteed, while acknowledging clients directive to proceed on the suit to enforce his right to liberty.

On contacting the lead counsel, Victor Opara, SAN, who confirmed the development, told our correspondent that the matter is in the court now, and at such, he wouldn’t want to say anything that will sound prejudicial.

When contacted, Chinelo Ukatu, the wife the detained businessman, confirmed the arrest and detention of Mallinson, saying that he was released on bail Wednesday, October, 12, 2022 after fulfilling the bail conditions around 6:00 pm.

“But just as he was about entering his car, a group of armed men on mufti grabbed him, hit him on the ground, beat him up and forced him into their vehicle and whisked him away.

“When I asked whom they were, they kicked me, and when I insisted, one of them flashed his Identification, ID, card and that was when I knew they were from the NDLEA. They kept saying that they are re-arresting him on the instruction of the ‘powers from above’. They even refused me going with them. But about two hours later, I got a call from him that he has been taking to the NDLEA cell at the international Airport”, Mrs Ukatu stressed.

According to her, the following day she took food to him but they denied her access until about 12:00 pm when they told me, “They have gotten clearance from above”, adding that the NDLEA officials denied him access to his doctor who came to treat him for the pains resulting from the beatings from the NDLEA officials.

Recall that Mallinson has been in detention since April 13th, 2022. He was later arraigned at the Lagos Judicial Division of the Federal High Court of Nigeria on a three count charge of unlawful trafficking in 322 Kilograms of Tramadol in a Charge No: FHC/L/159C/2021.