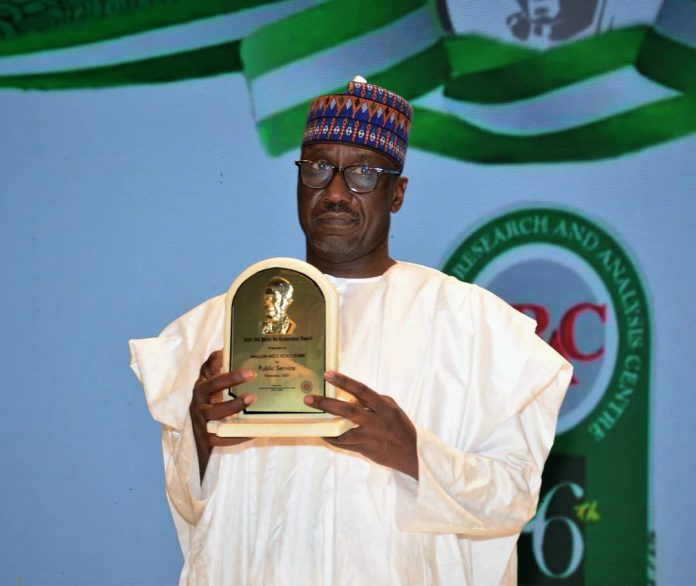 GMD/CEO of NNPC Ltd, Mele Kyari has been commended for transforming the fortunes of the NNPC from a position of loss-making into a profit- making venture.

The Public Policy Research & Analysis Centre, PPRAC, gave this commendation while conferring its “2020 Zik Prize for Public Service Leadership’’ on the GMD, at the Eko Hotel, Lagos, at the weekend.

Speaking on behalf of the Centre, Chief Mac Wabara said Kyari was recognized following his distinguished leadership role and sterling achievements in the NNPC, which are all evident through the various reforms he instituted at the Corporation through transparency and accountability.

He said: “Mele Kyari continues to seamlessly transform the operations of NNPC, including deepening domestic gas utilization, rehabilitation of the nation’s refineries and public disclosure of NNPC accounts, the first in NNPC’s 44 years of existence.”

He added that Kyari’s greatest achievement, no doubt, was turning around the fortunes of the NNPC, from a loss of position, into a profit-making entity.

He further explained that Kyari also consistently played a huge role in the enactment of the Petroleum Industry Act, PIA, stressing that with the coming of the legislation, the NNPC is now well-positioned to operate efficiently, like its global peers.

Responding,  Kyari said in the last two years, the NNPC has automated its processes and systems; reduced its costs of operations and focused on delivering value to Nigerians, in line with his Management vision of Transparency, Accountability & Performance Excellence, TAPE.

He added that the enactment of the Petroleum Industry Act, PIA, has placed huge responsibility on the NNPC to do things differently and be much more accountable to its shareholders, the over 200 million Nigerians.

He said the Zik Leadership award will spur him and his Management team to work harder towards becoming an International National Oil Company that is at par with its global peers.

Established in 1994 by the PPRAC and now in its 26th edition, the Zik Prize in Leadership is aimed at highlighting Nnamdi Azikiwe’s legacy of patriotic fervor and nationalist vision.