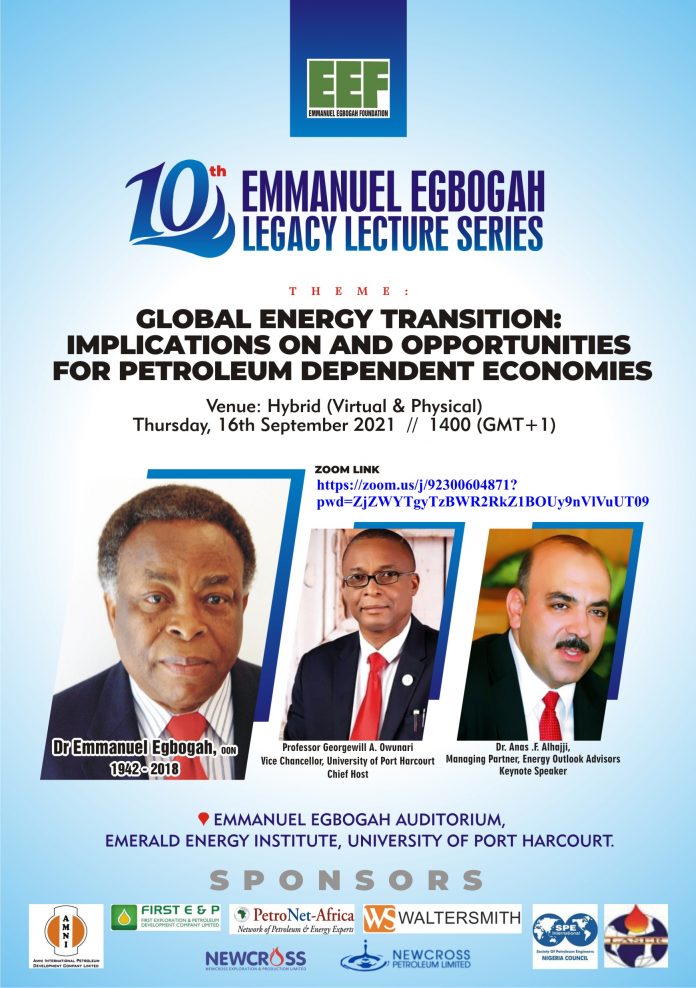 The theme of the legacy series is “Global Energy Transition: Implications On And Opportunities  For Petroleum Dependent Economies”.

The 2021 Legacy Lecture theme according the Foundation is tailored at addressing the implications of global energy transition on petroleum dependent economies, especially Nigeria.

The Emmanuel Egbogah Foundation, EEF, was established in 2019 in Honour of Emmanuel Egbogah, (1942-2018). The Foundation is aimed at promoting his legacy anchored on the principle of prosperity for posterity. The focus area of EEF lies in human capital and skill-set development for the petroleum and energy sector in Nigeria.

The Foundation visions to build on the lofty goals and achievements of  Emmanuel Egbogah, through his endowments in higher education. The late Egbogah was Co-founder and Chairman of Emerald Energy Resources Limited, the Operator of continental shelf block OML 141, Niger Delta, Nigeria. He was the Chairman of the Joint Interest Executive Committee (Board) of the Block OML 141.

Egbogah was a former Special Adviser to the President on Petroleum Matters, Federal Republic of Nigeria; Member, National Economic Management Team and Chairman of the Governing Board, Nigerian Nuclear Regulatory Authority.

He had over 45 years of diversified geological and petroleum engineering experience in consulting, teaching, research & development, and project planning, implementation and management in Canada, United States, Europe, Africa, Middle East and the Asia Pacific region. He was an internationally recognized authority in the fields of petroleum policy and strategy, improved/enhanced oil recovery, stimulation procedures and multidisciplinary team approach to field development planning and reservoir management.

Previously, the Oil and Gas Icon served for eight years as Technical Advisor and Technology Custodian for PETRONAS, the national oil company of Malaysia, where he was responsible for strategic planning and expansion program leading to the company’s E&P establishment in over 25 countries around the world. He served for five years as Enhanced Oil Recovery Advisor for the Libyan National Oil Corporation, Tripoli, where he was responsible for the Reservoir Management of 159 reservoirs containing about 40 billion barrels of oil reserves. He was responsible for the planning and supervision of EOR programs in 34 Libyan reservoirs.

A former Petroleum Engineering Manager & EOR Specialist for Amerigo International in Calgary and Houston. He was previously Vice President Engineering for Applied Geoscience and Technology (AGAT) Consultants Ltd of Calgary, Alberta, Canada, where he directed a multi-million dollar, multi-client study on Reservoir Sensitivity and Completion Procedures Project on behalf of 53 multinational and 10 independent oil companies, issuing a 2200-page report of the same to its subscribers.

He started his oil and gas industry career in Canada with Phillips Petroleum Canada (Pacific Petroleums) Ltd in 1973. He is a distinguished presenter of petroleum industry short course, workshops and seminars in field development, reservoir management, including applied petroleum geology, petroleum reservoir engineering, enhanced oil recovery, and strategic planning for many international oil corporations and organizations. He was the pioneer and founding petroleum engineering lecturer at the Institute of Applied Science and Technology, (later to be known as the Faculty of Technology), the University of Ibadan, Nigeria.

Egbogah authored and co-authored over 90 technical publications so far. A Distinguished Member (1995) of the International Society of Petroleum Engineers,  Egbogah was a Review Chairman for the Journal of Petroleum Technology, JPT, a 1993-99 Steering Committee member of the Asia Pacific Oil & Gas Conference and a 1992-96 Steering Committee member for Forum Series in Asia Pacific, and Chairman Of the 1995 SPE Forum Series in Asia Pacific on “Challenges in Gas Reservoir Management,” member of the Diversity/Governance Task Force, SPE Speakers Bureau Speaker and member, SPE Cedric Ferguson Gold Medal Committee.

He served as Senior Editorial Advisor to the Society of Petroleum Engineer’s flagship Journal of Petroleum Technology on Field Development Planning and Reservoir Management (1992-1998). He served as Chairman of the SPE Applied Technology Workshops on Practical/Cost-Effective Reservoir Management and Multidisciplinary Field Development Planning as well as Steering Committee member, SPE Asia Pacific International Conference on Improved Oil Recovery (2001-2005). He was SPE Regional Director for the Africa Region. Egbogah was  also member of Petroleum Society of CIM (Canada), American Society for Engineering Education, International Society for Rock Mechanics, and the New York Academy of Sciences. He is a registered professional engineer of the province of Alberta, Canada. He is listed in the world’s Who’s Who in Science and Engineering, and is the life Patron of the African-Caribbean Network for Science & Technology, United Kingdom. Egbogah is the recipient of the Society of Petroleum Engineer’s 1998 Asia Pacific Regional Service Award (Jakarta, Indonesia, April 20, 1999) in recognition of his continuing and outstanding commitment of personal effort and time for technology transfer throughout the Asia Pacific Region and also received the 1999 SPE Nigeria Council Millenium Award (August 5, Abuja, Nigeria) in recognition of his active and dedicated service to the Society of Petroleum Engineers in the 20th Century. And in October 2013 The Society of Petroleum Engineers (SPE) honoured  Emmanuel O Egbogah with SPE/AIME Honorary Membership, the highest honour that SPE presents to an individual. It is limited to only 0.1% of the SPE total membership.

This elite group represents those individuals who have given outstanding service to SPE and/or who have demonstrated distinguished scientific or engineering achievements in the fields within the technical scope of SPE.

He was a Member of the 15-person African Oil Policy Initiative Group, AOPIG, the policy strategy think tank that produced the White Paper “African Oil: A Priority for U.S . National Security and African Development” which forms the new American oil policy predicated on West African Oil.

Egbogah served (2002-2003) as Long Term Policy and Strategic Advisor, Oil and Gas Sector, for the Presidency’s Bureau of Public Enterprises, the Secretariat of National Council on Privatisation with a responsibility for the Restructuring of the Nigerian Oil & Gas Sector of the Economy. He is a recipient of the Nigeria 2006 National Honour of “Officer of the Order of the Niger”, OON for significant contribution to the Nation’s development and is a Distinguished Member of the Nigerian National Commission on Science & Technology.

Egbogah served as African Union Peace Ambassador to Sudan (2013-2015) in the role of Chairman, Petroleum Monitoring Committee, responsible for the implementation of the Agreements on Oil and Related Economic Matters between the Republic of Sudan and the Republic of South Sudan.