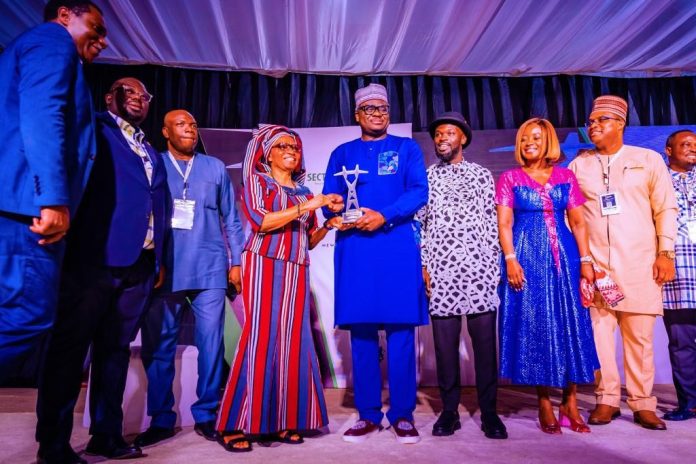 As part of its efforts to recognize giant strides made in bridging the gap in power supply and boosting the economy, the Nigeria Power Sector has awarded individuals and industries for their remarkable and noticeable achievements made in the sector.

The NPS Awards is said to be an initiative to publicly recognize and honor both public and private sector organizations and individuals who have contributed to the growth, innovation, and progress in the Nigerian Electricity Supply Industry, NESI. This strategic initiative is to also showcase the progress made across the industry as to inspire more growth as well as change the narrative of the Nigerian power sector.

Speaking during the fireside chat at the event, the Chief Executive Officer, Ikeja Electric, Folakemi Soetan, stressed the importance of exhibiting an authentic lifestyle to attract those who would want to help to attain greater heights.

While speaking on gender diversity in the workspace and admitting to the fact that men have been her biggest collaborator, the first female CEO in Ikeja Electric, advised women to set themselves apart by exhibiting professionalism and extending the gesture of collaboration with men to achieve the gender inclusion being clamored for. “It is all about having the value, the right attitude, and believing it is possible,” she added.

She further stressed that Ikeja Electric is on a transformation journey, while so much has been done, we are not there yet but have been very deliberate to come up with initiatives that will help take us to where we will like to be.”

Aligning her views with that of the Executive Director, Sahara Group, and Board Chairman of Ikeja Electric, Kola Adesina, also a recipient of the Power Sector Lifetime Achievement Award, she stated that the company will not relent until there is light in Nigeria.

Ikeja Electric remains the proud winner of this year’s Industry Awards on the “Most Gender Diversity Utility Company and Best Electricity Distribution Company” in Nigeria.

Also, the Special Adviser to the President on Infrastructure, Ahmed Rufai Zakari who received the Leadership and Excellence Award in the Power Sector, expressed appreciation for having recognized what his team is doing under the PMB administration. He said the award aid to highlight positive things happening within the industry even though there has been a lot of misinformation and discouraging comments in the power sector.

Other individual award recipients are, the  Minister of Power, Abubakar Aliyu who bagged the Trailblazer Award, Former President, Olusegun Obasanjo.